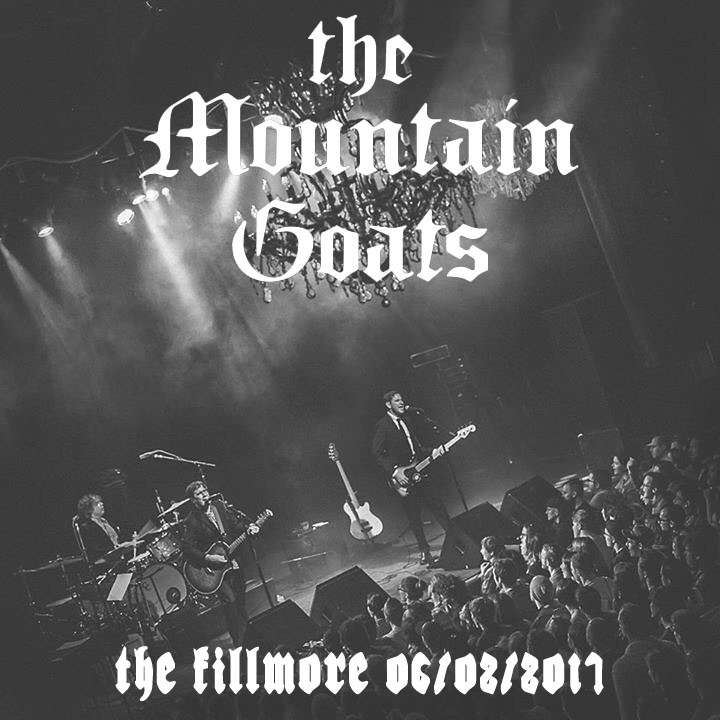 I wish John's vocals were louder at some points, but it's basically exactly what you heard in the room, and it's hard to imagine a better recording without plugging into the board. I hope everyone enjoys. (edit: LMGBnote ~1.5 years later- after catching the live taping itch, perpetually seeking to improve my gear and techniques, it is wild reading this comment. All I did was plop my h4n pro down and point it between the stacks, XY 90 degrees. Simple as can be. Goes to show how much of taping is positioning.) ((EDIT2: lmgbnote ~2.5 years later, after learning more about mixing/mastering- reading this is hilarious, I hear so many faults with the recording, and now I kind of want to remaster it, but I know that at one point I thought it was great, and it probably holds up better on car stereos / smaller earbuds like I was primarily using back then, so I am conflicted. Come back another year later for yet another update.))

Recorded on the balcony of the Fillmore- 24bit/48khz. Thank you to the Mountain Goats for creating such beautiful music. Thank you to John Darnielle for supporting livetaping, and thanks to everyone else who has ever taped a show. They've brought me countless hours of enjoyment, as I hope mine do as well.

Please throw as much money at the Mountain Goats as humanly possible- their official store is located here https://themountaingoats.kungfustore.com

reward their support of live recordings! and always make it to a show if you can. see y'all down the road.

sorry for knowing you were recording the show and singing the absolute worst i have ever sung.

with love, from san jose.
Reviewer: TheAmazombie - favoritefavoritefavoritefavorite - June 7, 2017
Subject: Overall Good Set/Recording
The overall recording from the balcony here is strong, especially since I was sitting next to the recorder and expected it to pick up more of my screaming/singing, which it didn't.

Overall the set list was great, John was blasted by the end of the night and slurring lyrics a bit towards the end, but this live show made me fall in love with the new tracks from "Goths" which I had been rather lukewarm on since the release of the album.

John played and just seemed to want to keep playing, as is evident by the long setlist. I hope to hear "We Do it Different On the West Coast" at all California shows from now on - it can replace the classic "California Song" that he does most often in SF. Either one will do.

Keep it up, good recording of a strong show!